The B.A. in English with a concentration in English Studies is built upon a broad foundation in the liberal arts, combining the study of literature with the study of language and communication. The curriculum is integrated through sustained attention to linguistics, problem-solving rhetoric, and the interpretation of literature and other texts. Students learn the stages involved in successful writing and speaking, especially the value of revising and editing their work according to criticism obtained through feedback.

Graduates go on to work in advertising, public relations, writing and editing, and other fields. Jobs include writer, editor, teacher, public relations coordinator, and communications specialist. The program is particularly suited for students who plan to go to graduate school, or law school, or to pursue professional careers in a variety of fields. Students in this concentration may be eligible for the pre-law advisory program.

Interested students in this course of study may be eligible for the Early Law School Admission Program.

What can you do with an English major?

An English major is a broad and flexible degree; rather than preparing graduates for a narrow occupation or job position, a degree in English “offers graduates a wide variety of career paths to follow. With an emphasis on communication and the written word, English majors learn to research, analyze and interpret information. They are encouraged to be critical and creative while exploring the many cultures of the world around them as well as the cultures that have come before them” (“Ten Things to Do with an English Degree”).

Why an English major at RMU?

Compared to competitor’s departments, RMU’s English department is very strong in its continuing tradition of forging interdisciplinary connections that integrate “liberal arts with a professionally focused, applied education that prepares students for leadership in a rapidly changing world” (Mission Statement). English faculty teach in the interdisciplinary DSC program, publish in interdisciplinary journals (such as The Journal of Popular Culture and Issues in Information Systems), and have been awarded grants to work collaboratively with faculty from the School of Education and the Department of Engineering. This models for students the multiple internship and career paths open to English majors with interdisciplinary interests and abilities.

What is an English Education major? 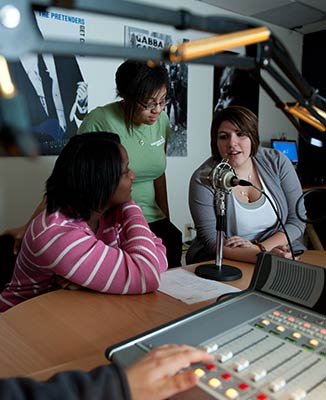 “RMU’s communication skills program sets them apart. That was one of the things that gave me an immediate leg up when I got out into the workforce.”