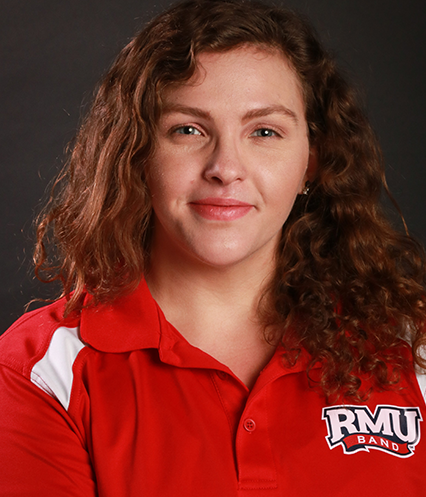 "I love that I can go to a classroom and know everyone, but also meet new people every day if I want."

Amanda Linn came to Robert Morris University thanks to the Pittsburgh Promise Scholarship, which currently provides qualified graduates of the Pittsburgh Public Schools a $5,000 annual scholarship to any Pennsylvania college or university.

She was accepted to the University of Pittsburgh, where she also would’ve had a significant discount, but was attracted to RMU’s smaller size and sense of home.

“I love that I can go to a classroom and know everyone, but also meet new people every day if I want,” she says.

Now a junior studying both computer information systems and data analytics in RMU’s integrated program, Amanda will graduate with both an undergraduate and graduate degree after just four and a half years.

At Robert Morris she quickly found a community of friends with the RMU Band. Amanda plays piccolo and attends every RMU sporting event to cheer on the Colonials. She is the vice president of service for Kappa Kappa Psi, the band fraternity, organizing volunteer and philanthropy events for band members to participate in.

Amanda is looking forward to a 10-week, paid internship this coming summer at BNY Mellon.

She will be assigned to a data and technology related project with a team of fellow interns and is eager to gain hands-on experience that she can bring back into the classroom.

“I cried immediately when they called me back saying I got the internship,” she said. “It was finals week, I was working so much, and was so stressed out, and that news was exactly what I needed.”

“I want to make a difference.”