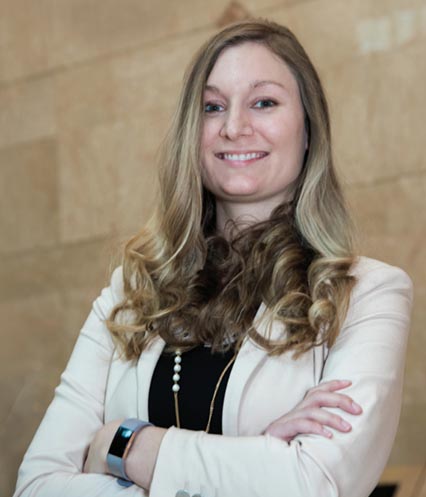 School of Engineering, Mathematics and Science

As an actuary for Highmark, Jaclyn Bosiljevac Cox works with a team of analysts to set health insurance premiums for big companies with thousands of employees. It’s a perfect job for someone who always had a knack for numbers. It’s also a career she never would have dreamed of back when she was in high school.

Her actuarial science professors at RMU made all the difference, Jaclyn says. One-on-one attention and support helped her to get through the challenging coursework, especially as a freshman. Two professional internships during her time in college further prepared her for career success. Jaclyn also met her future husband Jeffrey, another Robert Morris alum, at an internship program Downtown. The rowing coach recruited her for varsity crew, and she loved it so much she still rows for Highmark’s corporate team. Now she advises younger women in the university’s Women’s Leadership and Mentorship Program.

Only 16 universities in the United States earn the designation Center of Actuarial Excellence, the highest recognition given by the Society of Actuaries. Considering the success of graduates like Jaclyn, it’s no surprise RMU is one of them.

"The social skills I learned working at the career center, I was able to use to get my internship — and it led to a full-time position."

"Robert Morris gives you a lot of opportunities to practice being in a classroom and managing relationships before you even start student teaching."