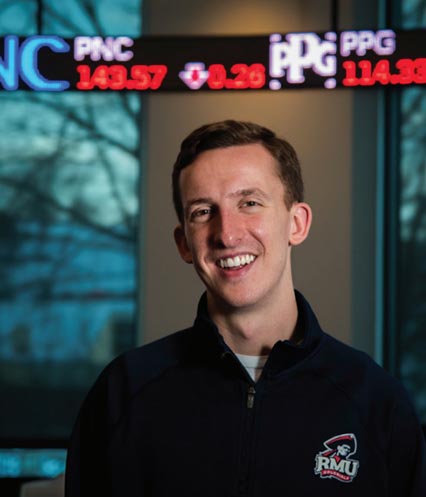 “RMU taught me how to set myself apart and to network, which ultimately sets me up for success in my career.”

ANDREW MILLER loves a big game, and he came to RMU to pursue his dream of being a sports broadcaster. However, once he started taking classes, he discovered other opportunities to explore that led him in directions he wouldn’t have dreamed of in high school.

As a dual major in marketing and sport management, Andrew helped to organize the department’s annual career and internship event. At the event, he met with an RMU alumnus now at the Portland Trail Blazers, and before he knew it Andrew had an internship as a season ticket account manager for the NBA team. As a member of the student chapter of the American Marketing Association, Andrew learned some good techniques in promotion. Those served him well the three years he headed up Colonial Chaos, a free-throw fundraiser for cystic fibrosis that brings in close to 400 participants.

Excellence in his studies and at his internship led to a full-time job offer from the Trail Blazers after he graduated. Instead, Andrew decided he was ready for another side of business entirely. He recently accepted an offer from Bloomberg BNA, an established provider of tax, legal, and compliance research for financial professionals, to join their outside sales trainee program in suburban Washington, D.C. Now Andrew is on track for an exciting career — just not one that he would have been able to even describe a few years ago.

“My dissertation literally paid off. I hadn’t even finished writing the thing when I was called and they asked if I wanted the job.”

"Studying abroad has given me the opportunity to see the world in so many different perspectives and has allowed me to become more independent."