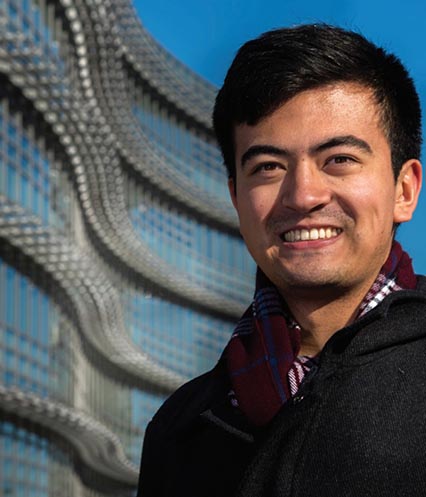 “The companies that recruited from Robert Morris were the companies I wanted to work for.”

He knew he wanted to study business, but Jordan Frazier wanted to keep his options open. So Jordan wound up triple-majoring at RMU in accounting, finance, and economics. And quadruple-interning — twice at PricewaterhouseCoopers, once at KPMG, and once at a local healthcare technology startup, where he worked directly under the CFO helping to prepare for their first real audit.

If it sounds like Jordan was in over his head, think again. On campus he also was president of the Association for Future Accountants for two years and an officer for the RMU chapter of Beta Alpha Psi, the prestigious national honorary fraternity of accounting and finance. On top of all that, he completed an impressive 150 credits with a perfect 4.0 GPA, ready for his CPA exam. No wonder Jordan already had a job offer from PWC when he graduated last year. He works Downtown now as an audit associate — the job he was shooting for since freshman year.

For nearly a century, Robert Morris University has been training talented accountants for the Pittsburgh region and beyond. Students like Jordan go from successful internships at major Downtown firms to full-time careers with leading public, private, and government employers. “Robert Morris played a significant role in getting me to where I am. They gave you everything you needed to succeed; it was up to you after that to take what you learned and run.”