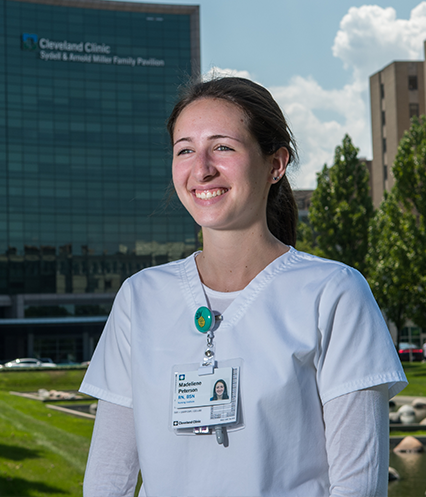 “I really have to be on my ‘A game’ as far as knowing the diseases and medications, and I feel Robert Morris prepared me well for it.”

When Madeliene Peterson pulls into the Cleveland Clinic parking garage, she knows she’s got to be at her very best for the next 12 hours. People’s lives depend on it.

“It’s very difficult on a lot of days,” says Madeliene, a registered nurse in the cardiovascular ICU. “I have very, very ill patients who could have heart attacks at any given moment.”

Madeliene’s never had trouble getting focused and performing at a high level. She graduated a year early from Moon Area High School with nine college credits, which she earned through a program that allowed her to take general education courses taught by RMU professors.

With a headstart on a bachelor’s degree in biology, Madeliene eventually realized she wanted to be a nurse. Again, RMU helped her make it happen with the accelerated second-degree program in nursing. It combines classwork with clinical experience to prepare students for the R.N. license exam in just 15 months.

Madeliene says the ability to do her clinical work in a cardiothoracic ICU with the University of Pittsburgh Medical Center was key to her job offer with Cleveland Clinic, widely regarded as one of the world’s best hospitals.

“Had I not had those clinical experiences, because UPMC is such a great system, I probably would not have gotten the job,” she says. “All of the simulation and everything we did at Robert Morris really helped prepare me for this job.”

“The professors and advisors on my doctoral research project are committed to supporting me. They really encourage me to stretch myself.”