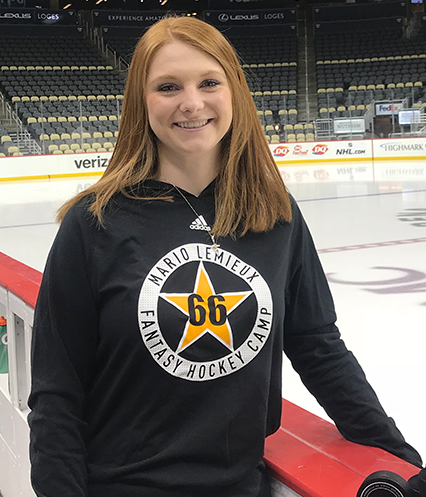 "I knew I had to choose a university with strong ties in the community in order to make it in this competitive industry. I took full advantage of what RMU offered and have never looked back."

Jordan Curry has always been motivated to work for a good cause, helping the disadvantaged and doing good for society. She also is a big hockey fan. The job she accepted last spring after graduation — program coordinator for the Mario Lemieux Foundation — is a perfect combination of the two things that motivate her most.

It’s no surprise to anyone who knows her that Jordan got such a great job. She made the most of her time at RMU, majoring in marketing and sport management and taking four internships, including one with the Lemieux Foundation. She worked on charity races, fantasy hockey camps, and fundraisers for cancer research and patient care, and met Mario himself. It was a dream come true for Jordan.

“Networking is key,” she says. “I knew I had to choose a university with strong ties in the community in order to make it in this competitive industry. I took full advantage of what RMU offered and have never looked back.”

RMU helped Jordan not just with learning and networking, but with money matters. When she told a financial aid officer that she needed one more scholarship to be able to stay enrolled, she says a week later one showed up on her account.

Jordan’s experience is not unique at RMU. Ninety-five percent of Robert Morris graduates have a job or are enrolled in graduate school within one year of earning their degree. A Gallup survey found that RMU graduates are more likely than college graduates nationwide to have had an internship where they applied what they learned in the classroom, like Jordan did.

"Completing my master’s was something I had always wanted to do."

"I chose to receive my M.B.A. from RMU because of the program's  flexibility for working professionals with kids and also its national reputation as a top business school, and I wasn’t disappointed."