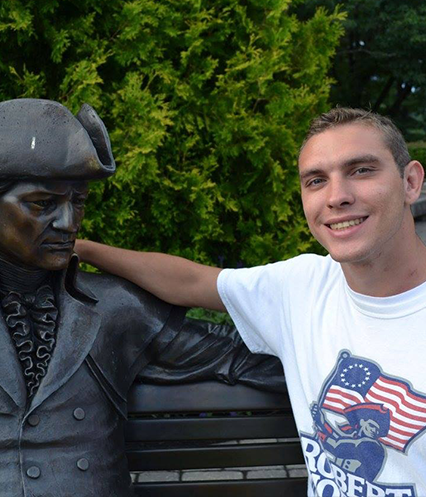 Jordan Perrucci finished his college career as a high-performing student whose laser focus on his future led to a job waiting for him upon graduation. But it wasn’t always that way for the Brashear High School graduate.

Jordan hit a rough patch for a couple semesters in his classes as a cyber forensics and information security major. “I was kind of like a C average, didn’t really do much extra, did papers the night before,” he says. At one point he was so overwhelmed by a couple of classes that he stopped going altogether. His GPA plummeted, and there was no guarantee he’d be allowed to enroll for another semester. Then he got a phone call – a wake-up call, actually – from his academic counselor.

“He really convinced me that this program is something I started and should really finish, because there are a lot of opportunities,” says Jordan. “Something clicked.”

Jordan’s counselor encouraged him to bring his homework to the university’s Center for Student Success, which provides academic support and one-on-one tutoring and guidance. “I went there every day and ended up almost getting straight A’s, which really got the ball rolling. The next semester I was disciplined enough to get the work done,” he says.

Jordan ultimately conquered the two classes that almost derailed his academic career, earning A’s in both. At a career fair in the spring of his final semester, he made a strong impression with Corazon, a Pittsburgh-area healthcare company where he now works as an information systems analyst. “My job is basically troubleshooting, so it’s something different every day,” he says. “Anytime I get a chance to learn something new, it makes me feel good.” “RMU taught me how to set myself apart and to network, which ultimately sets me up for success in my career.”