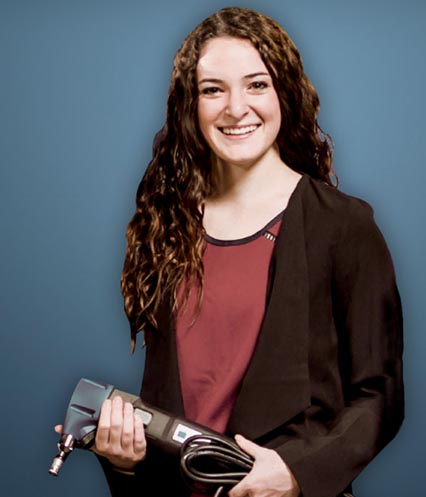 “The skills I learned at RMU helped me to realize that, because I know how to communicate effectively, the sky is the limit for me.”

As a marketing major at the School of Business, Megan Gold learned the value of communicating messages effectively. That’s something she applies every day in her job at Lockheed Martin as a software engineer. Megan doesn’t have a science background, but she is effective at explaining complex topics to other audiences who lack a technical focus. She credits her time at RMU with preparing her for this role, including an internship at the company that eventually hired her.

Megan was a member of Alpha Mu Alpha, the marketing honor society, plus a dean’s scholar every semester, and played defense on RMU’s NCAA Division I lacrosse team. But perhaps most memorably, she was part of a study abroad business project teaming her and two of her classmates with three students at the University of St. Gallen in Switzerland. The team collaborated on a feasibility study for Trumpf — a leading global maker of machine tools, laser technology, and industrial electronics — to market a new power tool in the United States. Besides meeting new friends and getting to soak in some lovely mountain scenery, Megan and her Swiss and American teammates put together a prize-winning report recognized at a Young Leader Award gala in the town hall in St. Gallen.

“The skills I learned at RMU helped me to realize that, because I know how to communicate effectively, the sky is the limit for me.”