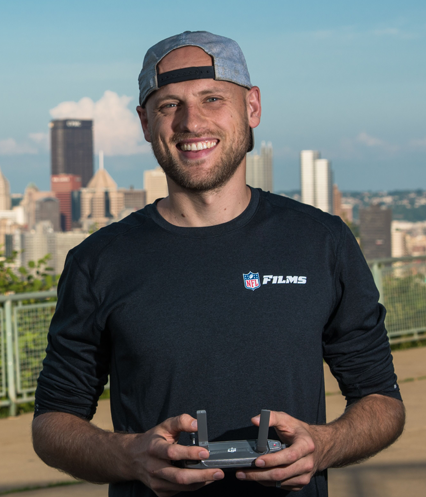 From the moment Nazari Dorosh first picked up a video camera as a 12-year-old, he knew he wanted to work behind the lens. It was Robert Morris University that sharpened his focus.

“From the second you walk in the door, they’re not holding your hand but they’re guiding you,” says Nazari, a 2010 Media Arts graduate. While working as a resident assistant, he picked up the skills to turn his hobby into a business, Dorosh Documentaries. His work in RMU’s media laboratory won him an internship with the Steelers, which turned into jobs producing and editing films for the NFL, Pirates, Penguins and others.

“For the Pirates, it’s all of their drone work and specialty feature stuff, like the shots of the players in the tunnel going out to the field. For the Pens, it’s their opener, right before the team comes onto the ice — aerials, cinematic shots of the team getting ready,” Nazari says. “I’ve done a ton of drone work for other universities, the Minnesota Vikings, the Las Vegas Raiders, where I’ve gotten to see stadiums being built.”

He and his wife and business partner, Elisabeth, film weddings together — the most gratifying part of his job, he says. The couple travel around the world, shooting drone footage of dramatic landscapes from Arizona to the Azores, and sell the drone footage to companies looking for b-roll for commercials or films.

“There have been many times when we’re watching a commercial, like a car commercial in California, and we’ll rewind and it’s like, ‘Holy cow! That’s ours!’” Nazari says. “That’s happened more than I expected.”