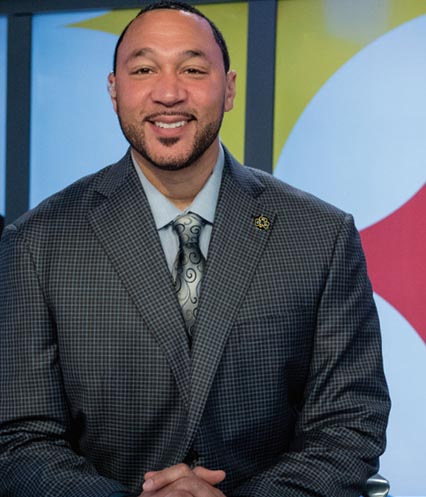 "Completing my master’s was something I had always wanted to do."

Winning two Super Bowl rings, co-founding a tech start-up, making regular appearances as an on-air sports analyst for television and radio programs, and starting a foundation to help kids in his hometown apparently wasn’t enough for Charlie Batch. So he went back to school.

The former Steelers quarterback finished RMU’s 10-month online master’s in organizational leadership recently, fulfilling his longtime goal of adding a graduate degree to what was already a long list of accomplishments. The program’s flexibility allowed him to mold it into a schedule that sometimes included postgame radio shows that didn’t finish until well after 2 a.m. Its focus on adults allowed him to incorporate his real-world experience into the first classes he had attended since earning his undergraduate degree almost 20 years earlier. Though those months definitely forced him to push himself, in the end Charlie was able to realize yet another dream.

RMU’s online graduate degree programs help mid-career professionals make the leap to the next job, the next promotion, or the next level in life — and you don’t have to be an NFL quarterback to do it.

"Data analytics is something I didn’t realize I liked so much until I started doing it."

"Without Robert Morris, I would never have had the opportunity to travel to Oman and Morocco to improve upon my Arabic speaking skills."